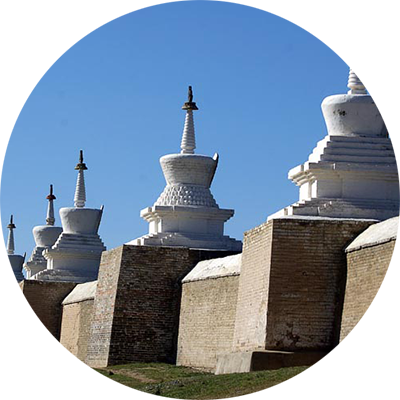 The imperial site of Karakorum is located on the right bank of Orkhon river and on the north-eastern slopes of the Khangai mountains. Karakorum existed for 140 years but was the capital of the empire for only 32 of them. In 1235, Ogodei, son and successor of Chinggis, surrounded it by a rampart measuring approximately 1.7 km by 1 kilometre; it was during this reign that Karakorum became a true urban, diplomatic, and commercial centre. Despite this, it managed to retain a trongly nomadic appearance.

The town was largely inhabited by foreigners including officers and secretaries of the court in the service of the empire, merchants,diplomats and artists.

Located north west of the imperial site of Kharkhorum, this monastery was built on the site of the ruins of the ancient Mongol capital. It was the first great Buddhist monastery of Northern Mongolia, and for centuries one of it’s most important. In it’s time, it rivalleed Urga as the the main center of Buddhism. At the present, 108 stupas are surrounding the monastery. It’s 400 metres by 400 metres and each stupa was erected in commemoration of a particular event, related in the inscriptions on each one

Erdenezuu and the vagaries of history: The construction of ERdenezuu began in the 16th century and continued until the middle of the 19th century. The temple have been built in a mixed styles which are Mongol style, Chinese and Tibetian style. The temples often suffered fire or attack over the years. In 1731, they were violently attacked by the western Mongols and between 1760 and 1814, they were restored several times. At the beginning of the 20th centuries, there were more than 600 temple halls and places of worship there, making the most powerful of the Kalkh monasteries. But the Purges of the 1930s finished most of the temples and today only about 20 remain. What was left of the great monastic complex was turned into a museum in 1965 and Erdenezuu re-opened as a place of worship in 1990.

The excellent location of TOVKHON KHIID was selected by Ondor Gegeen Zanabazar on this 19th birthday. It was in 1653 and he named it ‘’Land of Happy Solitude’’ the hermitage of Tovkhon is 68 kilometres from ErdeneZuu, in the wooded Shiveer Ulaan Mountains of Bat-Olzii sum.

Not far from the summir of the mountain, on a first platform, are several temple halls, one of which is made from wood. To the west of these, having passed some large rocks, one can see footprint attributed to the first Bogd Gegeen, and a small cave (uran darkhani agui) where Zanabazar meditated. Climbing further up, one at rives, at a second platform from which a spring runs out. Another cave is located here- the Ekhiin Khevlii (Mother’s belly) which is just big enough to stand in although you have to crawl to enter it. This is a veritable regressus ad uterum to which the pilgrims appeal in the hope of having their faults washed away in the next rebirth. From there one can climb higher and reach the summit of the mountain where there is an ovoo and rock called the place of naadam

Ondor Gegeen Zanabazar was the first leader of the Mongol Lamaist church and led an intense intellectual, religious and artistic life. His biography includes work as a bronze caster, goldsmith, translator, compiler, founder of monasteries, and creator of a new alphabet for the phonetic transcription of Mongolian, Tibetan and Sanskrit. Much of this work was done at tovkhon Hiid.

Travelers should note that women are not allowed to climb to the summit of the mountain and the monks make sure that rule is followed. In 2001, a Tg 68,5 million restoration project on the monastery was completed, bringing the temple back to their original glory. 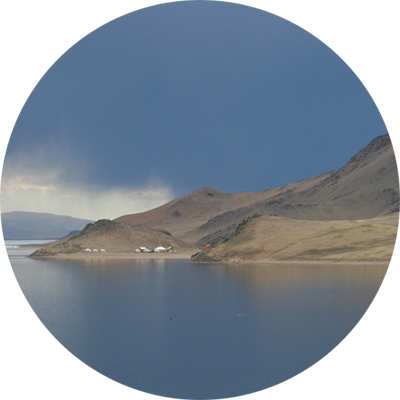 Terkh White lake is located 648 km from Ulaanbaatar city in Arkhangai province. Fresh water and volcanogenic Terkh White lake, is 16 km long from west to east and 6km wide from north to south. This lake was created as a result of a 4050 cm thick basaltic blockage of Terkhiin River, following the eruption of Khorhiin togoo and some other volcanoes.

The highest Khorgiin togoo, is located on the east shore of Lake Terkhiin Tsagaan. From its summit , which is covered in ovoo, one has a splendid view over the whole region and the lake. Terkhiin Tsagaan has more than 10 species of fish such as Taimen, perch, lenok and pike. It’s registered in Ramsar’s Convention because many birds including swan, shelduck, duck, gull, common heron and great white egret gather here. There is a small Island with 500sq km area and 28m relative altitude, called Nuuriin Tolgoi, in the middle of the lake. Khorgo dormant volcano, TErkhiin Tsagaan river and Khuduu river have been protected as a National Park since 1995. 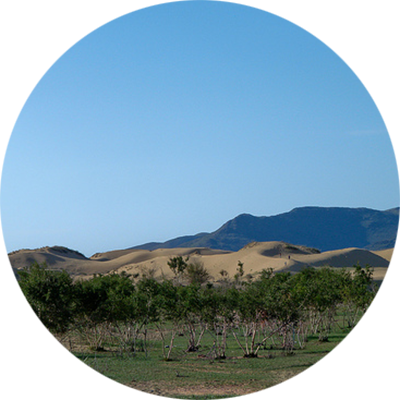 Khugnu Khan mountain is located 290 km southwest from Ulaanbaatar and northeast of Mongol Sand Dunes. The landscape consists of smallish mountains around 1500 – 2000 m in altitude and small hills and plains between them. The highest point is Tsetserleg /1967 m/. This mountain is consists of yellowish granite stones and rocks. There are 2 mineral springs on the south of Khugnu Khan. The smaller one is good for eye illness and other is good for stomach and other internal organs. 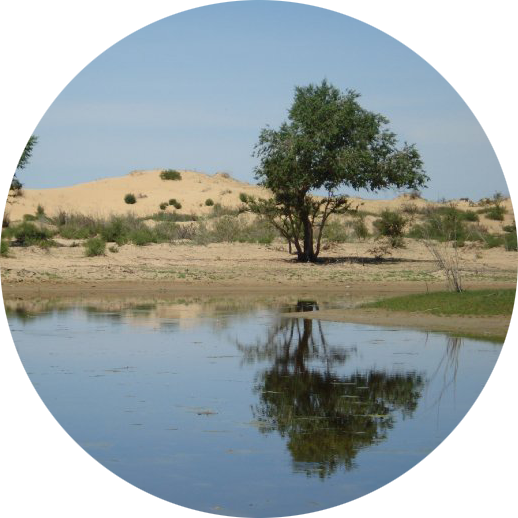 Mongol Sand Dune massif lies along the east side of the Tarna river and it holds 58.3% of the dunes in Khangai region. The widest part of the sand dune is 9-10 km and birch and larch trees cover the the top.

The mountain has been protected since 2003 as a National Park. There are many historical places, including: Uvgun temple, Erdene hambiin temple, granite stone statues, SEnget khad dating back to the Bronze Age, many tombs and tumuli in Khiidiin davaa in the south of Khugnu khan. 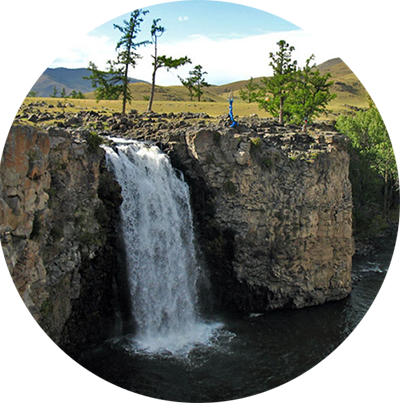 The Orkhon river, longest river in Mongolia, begins at the state worshipped mountain Suvraga Khairkhan in the Khangai range. The drainage basin of the river is 132835sq km. The river is 10-60 m wide to begin with but it becomes 120-150m around the end and the speed of the river flow decreases. The Orkhon has many species of fish like the pike, Siberian sturgeon, taimen, asian common asp, Siberian grayling, roach etc. There are many rocks and boulders around the river as well as some waterfalls like a small waterfall with 4-5 m height and the Ulaan tsutgalan waterfall- biggest in Mongolia at a height of 20m.

The Orkhon river Valley has been protected since 2006 as a National Park.