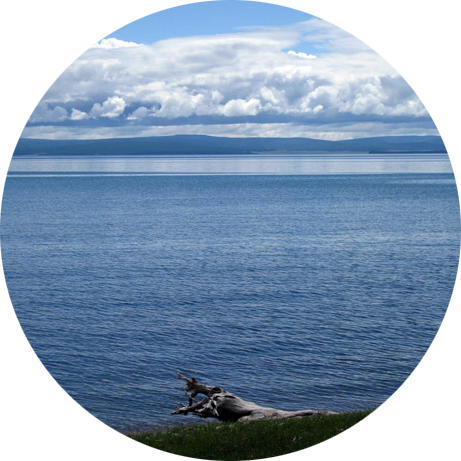 The jewel of Mongolia’s national park system, this one is given great acclaim by travel agents. The park, with a surface area of 838,000 ha, is enclosed to the north by the Saian Mountains and to the west by the Khoridal Saridag chain. It was created in 1992 to protect the lake’s ecology, which has long been jeopardized by miners, loggers and traders.

Lake Khuvsgul, 136 km long and 36 km wide, at 1645 metres above sea level, is the second largest lake in Mongolia as well as the deepest. Known as the Blue Pearl of Mongolia, because of it’s crystal clear waters, it flows into Eg River, which then joins the Selenge, and finally reaches lake Baikal.

Almost 70 percent of Khovsgol lake is over 100 metres deep, reaching 267 metres at its deepest point. This is the largest reservoir of freash water in the country and represents two percent of the world’s reserves. Such is the clarity of the water that one can see fish down to a depth of a few dozen metres. From January to April or May, the lake freezes over and covered for several months by 1.5 metres of ice. Lorries used to drive across it in winter, a practice banned since the 1980s to prevent pollution.

In the centre of the lake are four islands known as the “Earth Navel”, “Stone navel”, the “Wood navel” and the “Small navel”. Around the lake are a number of caves. Brown bear, musk deer, ibex, argali, marten. Beavers, elk, lynx and wolves inhabit the surrounding mountains.