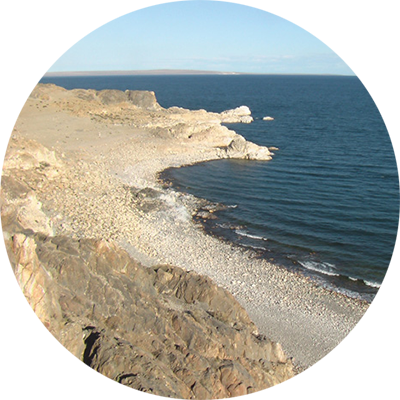 Large numbers of gulls and migratory birds live at Uvs Nuur in summer This immense lake (80 km wide and 80 km long ) is located 28 kilometers north-east of Ulaangom. Although at a relatively low altitude, it is one of the coldest places in the whole country in winter. The basin of Uvs Nuur is characterized by remarkable ecological diversity-desert, marsh, dunes,semi-desert, steppe, taiga, tundra, and glaciers-in a relatively compact zone. For this reason, it is now among the ten world sites chosen for an international research programme on biospheres.

Since 1993, the basin has acquired four strictly protected zones. The zones include Uvs Nuur, Mount Tsagaan Shuvuu, Mount Turgen and Altan Els, All the mountain valleys in the basin are rich in funerary sites. More than 2000 belong to various periods (Scythian, Xiongnu, Turkish, Mongol),

The large saltwater Khiargas Nuur, with sandy shores, is located 90 kilometres south-east of Ulaangom, at 1426 metres above sea level. It is fed by water from the Khankhokhi Mountian and is linked in the south to Airag Nuur, a small freshwater lake. It then flows into the Zavkhan River, of which an affluent in turn flows into Lake Har (on the border between Khovd and Zavkhan aimags).

Achit Nuur, located at the edge of Bayan Olgii Aimag, at an elevation of 1464 metres , is the largest fresh water lake in the province and also the largest lake in the Mongol Altai. Its waters join those of the Khovd River.

The saltwater lake Uureg Nuur (1426m), alongside the Olgii-Ulaangom road , is located among superb scenery, surround ed on all sides by the high summits of the Altai. The fishing and hiking opportunities are good here and it makes a perfect camping area. Rock paintings, representing animals, can be seen in the gorge of the Tsagaan river, which is the western affluent of Uureg Nuur.

Somewhat modest in size, the Har Us Nuur saltwater lake is located south-east, of the Kharkhiraa Mountians in Omnogovi sum. The lake ,sometimes called Olgii Nuur, extends along the road from khovd to Ulaangom. 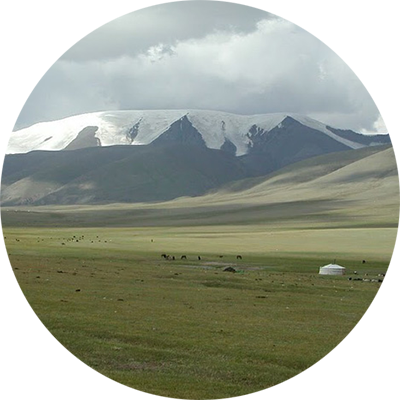 This mountain (4202 m) is covered in snow year round, and is located at the edge of Khovd Aimag (Erdeneburen sum) and Bayan-Olgii (Bayannuur sum). Its name means ‘scared white’ . to the south-east, at Salkhitiin Shuudain Zost (Erdeneburen sum) some remarkable engravings have been found on the large rock, representing Xiongnu warriors riding, caparisoned horses. On the same rock, are other riders, hunting scenes, ibex, and argali. Apart from the Xiongnu warriors, most of the carvings are thought to belong to the Bronze age. The mountain offers some good hiking, horse trails and spots. The snowy pack is also access ible to climbers with crampons.